The Internet of Things Commands Attention in Agribusiness

We are on the cusp of revolutionary technological change. The inherent value of the Internet of Things is in connecting devices to the cloud, which is no different whether you are on a farm, in a factory or any of a billion other places. The truth is, IoT is making significant inroads into Agribusiness in support of the smart-farming trend. IoT is leading the way for precision farming innovations. The precision agriculture market is expected to reach $3.7 billion by 2018, making IoT a worthwhile trend to follow in Ag.

NEW DIRECTIONS FOR AGRICULTURE AND FARMING

Advances in technology are creating unimaginable opportunities, yet are welcomed news for farmers. Agriculture technologies can be disruptive, but farmers are great at adopting new technology, especially when it helps productivity and delivers more accuracy in farming operations. For instance, my grandfather, who started farming in the very early 1900s, spent most days walking behind his two mules, Sara and Gus. He farmed 160 acres, which was barely manageable with the pre-tractor technology of his day. But if he saw modern planters do in 30 minutes what took him all day, he would probably shake his head in disbelief and say, “I was born a century too soon.”

Many growers welcome ag-tech. Successful farming now calls for modern agricultural science and technologies to keep an eye on farms that cover more than 30 square miles. With the historic drought, increasing population, and ever-increasing need to improve productivity, farmers are coming to rely heavily on technology for precision planting, growing, and harvesting. Some family farms have grown to huge dimensions, requiring computerized farm management systems and tractors the size of John Deere’s 9620R to keep up.

SOWING AN INTERNET OF THINGS MARKET IN AG

With a high-tech career spanning four decades, I have seen the early stages of IoT developments and small-scale integration into agricultural markets. For instance, while at Intel I helped provide semiconductors to a European company developing a robotic control system for a tractor guided by GPS. This precision allowed users to pinpoint locations in a field within inches and avoid taking out entire rows of the fence. The pinpoint location technology was one of the first smart agriculture IoT applications I came across but is certainly not the last. Given the success of that particular application, I believe an IoT market in agriculture is underway and will be done on a large scale.

Farms are an ideal place to deploy IoT given the number of environmental sensors being developed and deployed, the need for machine-to-machine (M2M) communication, and the necessity to find ways to increase productivity.

THE FUTURE OF FOOD PRODUCTION AND POPULATION GROWTH

Let’s look at the issue of productivity and the driving force behind the need for improvement. The UN Food and Agriculture Organization forecasted the global population to hit 8 billion by 2025 and 9.6 billion by 2050. In order to keep pace with this growth, food production must increase by 70 percent. However, the amount of available arable land isn’t increasing anywhere near this level. 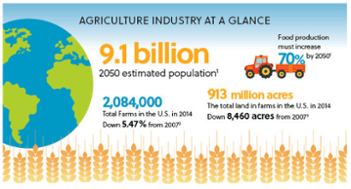 In actuality, per capita, arable land has taken a huge dip starting in the 1950s, when it was 1.2 acres per person, to only half an acre in 2000. During this period, the population doubled from 3 to 6 billion and today is more than 7 billion. With the addition of 2.5 billion inhabitants, the per capita land rate will drop to between one-quarter and one-third of an acre per person. Current production levels cannot hope to sustain a world population of 9.6 billion expected by 2050. This is a very strong motivator to find ways to increase the amount of food delivered on a per acre basis.

According to Beecham Research, the farm industry must embrace the use of precision agriculture and harness the benefits of IoT if it is to feed 9.6 billion people. Therese Cory, senior analyst at Beecham Research said: “The demand for more food has to be set against the challenges of climate change, more extreme weather conditions and the environmental impact of intensive farming practices.” To put it simply, farmers need new tools to allow them to squeeze every calorie out of existing grounds despite the ever-changing environment they find themselves facing.

Environmental sensors, in particular, are going to play a critical role in getting every bit of production out of an acre of land. Farmers will deploy sensors across a wide variety of uses and will need the data collected by each sensor captured and communicated in a real-time fashion. The value of the data comes from the speed it can be turned into information and a resulting decision be implemented. Over time, very detailed trends will emerge to give farmers a strategic map on their specific optimal planting plans. This does not take away the farmers input but gives them valuable and previously unavailable data to combine with their experience in order to make the right decisions based on current conditions.

IoT is already making a key contribution to water conservation. Freshwater makes up only 3 percent of the Earth’s total water, and agriculture consumes 70 percent of overall fresh water usage. States like California, Nevada, and Arizona, who rely on the Colorado River for much of their water, have become hypersensitive to the need to conserve in ways never before imagined.

Recent reports from NASA show the San Joaquin Valley is sinking as much as two feet per year due to water being removed from the aquifer. This not only has an impact on agricultural production but will also have serious structural implications to buildings, highways, bridges, railways and a host of other things. Georgia provides an example of how to reduce water usage using IoT technology.

The Flint River Basin in Georgia produces a variety of crops from peanuts to pecans and corn to cotton. Each year this quarter-million-acre area contributes $2 billion in agricultural revenue to Georgia’s economy. However, Georgia’s prolonged droughts threaten food production and revenue. The July 2015 drought survey from the National Centers for Environmental Information shows a large percent of Georgia, including the southwest section, experiencing severe drought conditions.

Higher prices for irrigation water, low crop yields, and concerns for life along the river have motivated a team of Ag engineers at the University of Georgia to develop a Variable Rate Irrigation system that makes it possible to selectively turn off specific nozzles on an irrigation system as it travels over the field. The system uses sensors to measure and collect temperature, soil conditions, and soil moisture then sends the data to the Internet and ultimately to the farmer.

The sensors provide real-time data, allowing farmers to determine optimal irrigation strategies based on actual conditions. Using temperature and soil condition data, an intelligent system can determine how much, if any, water a particular area of the field needs. It may be a low-lying area that is already too wet, a rocky section that is not planted or a day with cooler temperatures that decreases the demand for water.

The results are truly outstanding: A 30 percent reduction in water usage translating to a savings of 15 billion gallons of water annually. The university’s irrigation system reveals how IoT technologies, when implemented in a well thought out plan, can have life-changing impacts. I believe the key to having great project outcomes and successes like the University of Georgia is giving people with the right experiential background a set of tools to allow them to innovate in their areas of expertise. Case in point, Calvin Perry, whose team came up with the Variable Rate Irrigation system, grew up on a Georgia farm, became an agricultural engineer, and understands the needs of farmers as well as anyone. People like Perry can solve real-world problems when enabled with the right technologies.

The UN FAO estimates 24 percent of calories produced for human consumption is lost or wasted. Technology cannot eliminate all waste, but it can play a factor in saving a significant amount.

Pests and other diseases are major contributors to lost production every year. To prevent these losses, IoT sensors can help by monitoring and scanning environmental parameters and plant growth. As well as aiding in pest control by predicting pest behavior, farmers can use the information collected from these sensors in order to reduce large-scale damage done by pests.

Early detection and outbreak prevention of insects, viruses, and bacteria are financially critical in the agriculture business. An example can be seen in the wine industry. With an estimated 6.8 billion gallons of wine produced every year, just one bad year of production costs hundreds of millions of dollars in lost revenue.

INTELLIGENT SENSORS AND THE FUTURE OF STORAGE WITH IOT

IoT can also reduce losses during the process and storage of crops. Years ago, my brother managed a large cattle feedlot where thousands of cows were fed each year. Many times, I ran across pockets of moldy grain while loading the wagons for distribution. Sometimes the pockets were small, but many times they were significant depending on how well the grain was dried for the storage period intended. Sensors have the ability to measure temperature, airflow, and humidity in order to increase the efficiency and effectiveness of the drying process, and minimize loss from spoilage. These same techniques can be extrapolated across a wide variety of food storage requirements.

For example, home refrigeration technology is advancing at exponential rates. Fruits and vegetables that may have lasted only a few days stored in older refrigerators are now lasting for weeks due to better control of the refrigerator’s temperature and humidity. In the commercial sector, energy efficiency and control are equally important. The key difference and need for IoT and sensors at the commercial level are in the volume of food stored, which requires a far greater degree of monitoring and control.

Machine-to-Machine communication is another area increasing the need for IoT. Whether sensors to predict when a piece of equipment is about to fail or communication between multiple machines to maximize harvesting efficiency, there are opportunities for IoT to bring value. John Deere has taken this to heart and is delivering technology to farmers in the form of fleet telematics solutions and their Field Connect system that monitors air and soil temperature, wind speed, humidity, solar radiation, rainfall, and even leaf wetness. Farmers can retrieve the collected data through their wireless computers and mobile devices for real-time decision-making.

CHANGING THE GAME IN AGRIMARKETING

Many Ag companies must completely rethink their agrimarketing strategy to adequately address the changing landscape of disruptive technologies. To avoid failure, companies must change their organization’s strategies just as rapidly as the deployment of new technologies in the field.

To keep up to date, agriculture-oriented businesses need to understand the new farmer and be able to communicate and deliver solutions in ways that resonate with their needs.

In today’s hyper-connected world, you are no longer just competing against products, but against people’s habits. Habits are a primary market condition that needs to be factored into marketing efforts. Habits speed up our decision-making process, so companies must market solutions that can easily become part of a person’s habitual behavior. If people perceive your solution as something they can easily adapt, yields the same or better reward, then your brand will become their brand of choice.

Elevation Marketing is a leading B2B marketing agency serving the Ag industry. We leverage IoT technologies to track customer behavior and what people currently do to help agribusiness anticipate the problems their customers face and uncover utilities that cater to their needs. We use strategic market models and pull IoT analytics to predict and steer customer thinking, beliefs and behavior on behalf of our clients.

Check out our infographic on how the Internet of Things is changing the way we do almost everything. 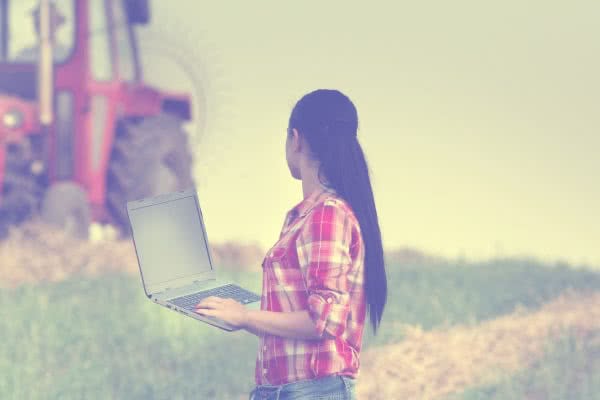